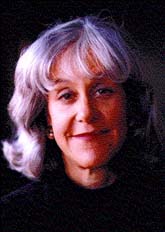 I'm always impressed when an author can move from one genre to another with competence but Kathy Lasky does so with such ease and skill that I am more than impressed, I'm awed. Looking for a good non-fictional picture book? Kathy and her husband Chris Knight have contributed many photographic essays and several have been award winners. Other Lasky picture books run the gamut from realistic to fantasy. Nonfiction for older children? One of her latest books is a biography of Mark Twain. If it's fiction you're looking for, she's written really good novels for young adults and for adults as well. Many or her very fine historical novels for young people rise above the crowd and her latest adult novel Night Gardening (under the pseudonym E.L. Swann) is due to make a big splash when it comes out this spring. She's prolific; she's versatile and she's good!

She's also very funny, loves gossip, movies and sailing with her husband. They've crossed the Atlantic twice and they've just bought a new and very lovely boat so I expect to hear that they've set off for an around the world trip any day now.

They have a lovely home in the Boston area. Their son, Max is a computer whiz in college at Dartmouth and their daughter Meribah is a junior in high school.

Many of Kathy's books spring from her real life experiences or those of her family. Marven of the Great North Woods is based on an experience her father had as a boy in Minnesota. Her father's family had come to this country to escape the tyranny of the Tsar in Russia and Night Journey (Viking, 1986 ISBN: 0140320482. Paperback.) has echoes of that experience. Pond Year is based on times she had with her best friend Carole at a pond near her home in suburban Indianapolis. Kathy's husband, Chris Knight, is a superb photographer and the couple has traveled widely with many picture books based on their travel experiences resulting from their combined talents. The main character in Beyond the Divide is Meribah, a name shared by Kathy's daughter.

I said she was prolific and that means we haven't room here to do justice to all of her books but here are a few of my favorites, starting with the picture books.

Based on the memories of Kathy's father, the picture book Marven of the Great North Woods (Harcourt, 1997 ISBN 0152001042. Library Binding) is illustrated by Kevin Hawkes and takes place during the influenza epidemic of 1914. Marven's mother and father decided that their only son must escape the peril. To this end they decided to send the ten year old boy to a remote lumber camp in northern Minnesota. Marven had no voice in the decision. When he worried about his lack of French - the language spoken by most of the lumbermen, his parents recalled their own mastery of a new language on their arrival in America. When he had no proper clothing for the arctic temperatures, his mother cut down his father's coat and lined it with beaver fur from which she also made earmuffs and a cap. His father made him a pair of skis and off he went.

The five hour lonely train trip was the least arduous part of the journey. When the train left him off at Bemidji, he strapped on his skis and crossed five miles of deserted, snow-covered fields until he reached the camp. Once there he used his math skills to organize the payroll for the camp but another responsibility, waking up the lumberjacks, was something for which nothing had prepared him. The language barrier began to crumble as a friendship developed between the small boy and Jean Louis, one of the lumbermen, even though he once mistook him for a grizzly bear.

Lasky makes the extraordinary adventure seem possible and Hawkes paintings combine with her writing to show wonder and tenderness. Use it with Gary Paulsen's brief novel Cookcamp (Yearling, 1992 ISBN 0440407044. Paperback.) and the tales of Paul Bunyan.

Lunch Bunnies (Little Brown, 1996 ISBN 0316515256. Hardcover.) is illustrated by Marilyn Hafner and shows Kathy's flair for humor and her ability to remember the fears of a child when confronted with life's challenges such as the school lunch room. First grader Clyde has heard a lot about the cafeteria - his big brother has been a fount of information on the subject - mean lunch ladies, mystery goosh and appalling disasters clearly await him. Clyde's worried but he needn't be. It's fellow first grader Rosemary who meets with disaster in the lunchroom and Clyde handles himself with such skill and daring that he is able to help her in her time of need. These characters may look like bunnies but anyone who ever worried on the night before school began about what door to go in will recognize him or herself in this one.

In She's Wearing a Dead Bird on Her Head (Hyperion, 1995 ISBN 0786820527. Library Binding.), illustrated by David Catrow, Lasky comes very close to nonfiction. She gives a personal slant to the founding of the Audubon Society. It's the turn of the century and two Bostonian ladies are affronted by the current fashion of ladies hats adorned with exotic bird feathers. As the fashion becomes more wide-spread and more outlandish - some are even wearing entire stuffed birds on their heads - Minna and Harriet start the movement which will become the Audubon Society. There are allusions to women's suffrage as well in this delightful and informative book. It goes well with Barbara Cooney's Island Boy (Puffin, 1991 ISBN 0140507566. Paperback.) in which Uncle Albion sells bird feathers from the schooner.

One of her latest books is Sophie and Rose (Candlewick, 1998 ISBN 0763604593. Library Binding.) illustrated by Wendy Anderson Halperin. Here Lasky remembers what it's like to love a doll so much that all the scars of its life are insignificant. Rose suffers lots of damage in Sophie's care. Much of her hair falls out when Sophie combs it and chocolate somehow seeps into the cracks in her cheeks which were obtained when her nose got chipped. Many of Rose's misadventures are not mentioned in the text but kids will get them from the delightful illustrations.

Moving on to Lasky's novels. My absolute favorite is Night Journey already reviewed on the website, followed closely by Beyond the Divide for which the same is true. I can't teach an immigration unit without the first or a westward expansion unit without the second.

Beyond the Burning Time (Scholastic, 1994 ISBN: 059047331X. Hardcover.) ranks right up there with them. This story of the witchcraft hysteria that gripped Salem Village in the 17th Century is seen through the eyes of Mary Chase. She and her widowed mother have little time for the gossip in the community, being too busy running the farm but then Mary's mother is accused by the girls and soon Mary is on the run. Lasky quotes various historical documents such as letters from Cotton Mather and dying declarations of some of those accused of witchcraft. Various officials engaged in the witch hunt begin to lose heart as the novel reaches its conclusion, some aware that they themselves are only a step away from being accused themselves. Indeed, Mary's mother has warned her arrestor of that fact. It's Captain Coatsworth of the ship Raven who turns out to be the salvation of Mary and her mother.

Lasky turns from historical fiction to modern censorship for a subject in Memoirs of a Bookbat (Harcourt, 1994 ISBN 0152157271. Hardcover.). Harper's family has reformed. Her mother and father no longer drink and fight. They have joined a religious group called F.A.C.E. (Family Action for Christian Education) and are traveling in a motor home to participate in protests and to ban books that don't suit their values. Since Harper is an avid reader whose eclectic reading often falls afoul of her parents' wishes, she'd be in trouble if they knew that her reading hasn't changed with their new views. She's learned to hide her books. They move frequently but Harper always manages to locate the library first thing and takes refuge there. When they settle in a California community, Harper makes a friend in Gray, the child of much more liberal parents. Now she and her parents are supposed to participate in a demonstration against abortion and, although Harper thinks she might well be against it, she cannot participate. This is a story about values and about the right of parents to control what their children read and the ideas to which they are exposed. It's easy to see where the author's sympathies lie but the conflict of values is well handled and the didactic nature of the plot is made palatable by the skillful characterization.

Space demands that we stop soon with this trip into the life and work of Kathy Lasky but not before we mention her recent biography, A Brilliant Streak: The Making of Mark Twain (Harcourt Brace; ISBN: 0152521100. Hardcover.). Focusing on the first thirty years in the life of the writer who was born and who died while Haley's comet streaked across the sky, Lasky uses delightful quotes from his speeches and his writing and many anecdotes about the man who often stretched the truth. Even within these lies, Lasky finds a certain truth. She links experiences in his life to places and events in his later works. I've often felt that Tom Sawyer is too often neglected in the upper elementary grades. It makes a wonderful read-aloud and Huckleberry Finn, with all the controversy surrounding it, must not be allowed to lie fallow either. This Lasky biography may lead some kids to discover those and others of his works even if the curriculum designers are afraid of them.

Go to Next Section of Newsletter: Behind the Desk

Return to Table of Contents of the Newsletter.